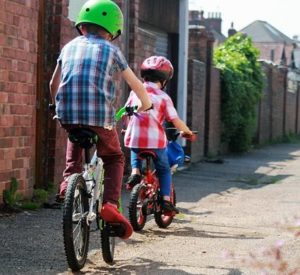 Children are particularly vulnerable to series head and neck injuries due to bicycle accidents, therefore, the Tennessee passed a mandatory bicycle helmet statute (“the Act”) to require all children under 16 years old to wear helmets while operating a bicycle. However, the Act does not mandate helmets for anyone 16 and over; therefore, the protections are only partially extended.

The Legislature found that fewer than five percent of children nationwide wear helmets despite extensive evidence that they prevent or obviate serious disability or death if an accident occurs.

The Act includes all bicycles, including multi-seats and tandem-operated bikes. However, it specifically excludes tricycles. The Helmet Law covers both the operator and passengers on a bike. Therefore, a child riding a bike operated by an adult would be required to wear a helmet.

In addition to the helmet rule, the Act also created a second safety requirement for children under 40 pounds or under 40 inches in height which obligated them to ride in separate seats with restraints (i.e. belts). Therefore, bikes marketed with spare seats who want to cater to children must include safety belts.

For adult offenders (i.e. parents who do not put helmets on their kids) the fine is two dollars. However, if within a year of the offense, the accused purchases a helmet and provides proof – they may recover the fine or avoid paying it entirely. Children are not fined or punished for failing to wear a helmet.

While anyone 16 and over is excluded from the Helmet Law, the failure to wear a helmet in an accident may be considered by the court as evidence that any award of compensation should be reduced. The courts take the position that plaintiffs who are partially responsible for the accident or their injuries should have their compensation reduced to reflect the plaintiff’s contribution to their injury.

Concerning bicycle accidents, if an adult fails to wear a helmet and suffers substantial injuries in an accident (injuries that could have been reduced by a helmet), the court may consider that as evidence that his damages should be reduced. Moreover, this presumption is reinforced when the Government passes laws or publishes reports that find wearing helmets is safer and affords greater protection.

However, Tennessee specifically excludes the use of failure to wear a helmet or safety restraint, as evidence in any civil trial.