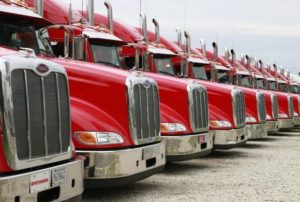 Truck platooning might just bring significant changes to the transportation industry in the very near future. An innovative system that promises improvements in large truck safety, environmental friendliness and overall efficiency, the technology is quickly winning the support of trucking companies, truck drivers and safety advocates across the nation. Although there are still a number of hurdles that must be overcome before truck platooning hits the road on a regular basis, according to Steve Boyd, the co-founder of Peloton Technology which is the leader in developing this technology, Arkansas, Michigan, and Tennessee have all already given the go-ahead for platooning, and about eleven other states are currently considering approvals as well.

What is Large Truck Platooning?

This cutting-edge technology uses hundreds of sensors and highly advanced communications systems to create a semi-autonomous convoy of large trucks that are able to share important data and vehicle control. The innovative “road train” is led by a lead truck that controls the additional truck or trucks through wireless communication. During normal operation, the trucks drive very close together, and when the lead truck reacts to a traffic situation (activating its brakes for example) the following trucks automatically do the same. When traffic conditions demand so, the trucks can disengage to widen the gap between them to allow for things like merging traffic, and then link up again when the situation allows.

The belief that truck platooning is centered around driverless or completely autonomous vehicles is a common misconception. In fact, truck drivers are still very much involved in the operation of the platoon. The lead truck driver’s responsibilities are very similar to what they would be during normal truck operation, and the following drivers still have steering control and access to video monitoring that enables them to see what is going on from the perspective of the lead truck. According to Peloton the system “simply augments driver performance and safety and leverages the cooperative potential between pairs of trucks.”

The Numerous Benefits of Truck Platooning

When trucks are able to travel closer together, aerodynamic drag is significantly reduced which increases fuel efficiency. And the smaller the gap between trucks, the greater the savings. Some studies report that truck platooning can result in anywhere from 4 to 10 percent better fuel efficiency depending on a truck’s position in the platoon. Since about 65 percent of large truck miles are platoonable, fuel consumption in the United States could potentially be reduced by 1.5 billion gallons or more each year. Without common close following distance regulations across all 50 states, however, actual fuel savings will vary significantly from state to state.

Large trucks are responsible for about 7.5 percent of total greenhouse gas (GHG) emissions in the United States. An analysis by researchers from the National Renewable Energy Laboratory (NREL) reveals that truck platooning could potentially result in a savings of about 15.3 million metric tons of carbon dioxide emissions every year.

The shortage of truck drivers in the U.S. has gained a lot of focus in recent years. And while large truck platooning will by no means make the human driver obsolete, the technology could have a positive impact on truck driver shortages. A system that encompasses driver empowerment, truck platoons are expected to transform the truck driving occupation into a more attractive career choice for new drivers and seasoned operators alike. As automation progresses, drivers will be even more highly trained and skilled.

The Federal Motor Carrier Safety Administration (FMCSA) reports that there were approximately 87,000 large trucks involved in injury crashes in 2015 alone. Sadly, about 4,050 large trucks were involved in crashes that resulted in fatalities. Fortunately, platooning technology could bring significant improvements to highway safety. With automated emergency braking systems, dynamic geofencing, vehicle-to-vehicle (V2V) communications, and increased driver awareness, large trucks that are equipped with platooning technology will have enhanced performance and safety features that are almost certain to reduce the number of large truck accidents on America’s roadways.

Although autonomous vehicles are likely several years away from becoming commonplace on America’s roadways, truck platoons are a different story. It is expected that a commercial two-truck platooning system could be released for fleet operations in the later part of 2017, and in upcoming years the deployment of platoons is only expected to grow. Full-volume commercial deployments aren’t expected until 2018.