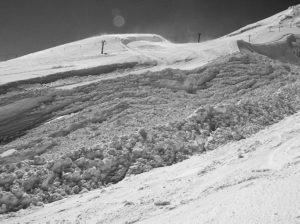 The clouds are rolling in and more of the powdery white stuff is on the way… snow, that is. This week may bring another 6” of snow to Denver, and this week’s storms are also bringing high winds of over 40 mph.

Wind gusts are more dangerous to your commute than you might think. While no one loves driving in windy conditions that whip their car around, especially when passing a large truck or bus. Wind also sweeps snow onto the roadways, cooling and patting it down, creating icier conditions than snow alone.

But the bigger issue in the news lately has been avalanche danger. Typically relegated to back country skiing, there have been numerous tragic avalanches across Colorado roadways this month.

In addition to the road closures, just this weekend, the Denver Post reported several injuries and one fatality related to “roof avalanches.”

Two men were working to create a safer environment for others in Crested Butte by clearing snow from a commercial building roof when they were trapped in a slide themselves. One was injured, while the other suffered fatal injuries.

Avalanche warnings were seen this season for the first time just weeks ago, but have been continually expanded as snow reports continue. In today’s media, the word “historic” may seem cliché at best, but the avalanche dangers in our state are truly that. Colorado has already surpassed the last several record years for the number of avalanches, and is quickly approaching the heartbreaking records set for injuries and death.

Why are we seeing so many monster snow waves sweeping across our highways? According to the National Weather Service, we are in the midst of a perfect storm.

It’s not just anecdotal that the memes showing a tropical paradise on the sunny side of the street with an arctic freeze on the other side seem to accurately describe Colorado weather. And that is the perfect recipe for avalanche disasters.

Simple avalanches are caused by high snowfall, usually in a rapid manner.

But the Colorado weather recipe of alternating cold to moderate temperatures destabilizes the layers of the fluffy stuff, causing a freeze-to-melt pattern made perfect for a slide.

The instability results in a snow break, which is marked by a separation of the unstable snow from more stable packed snow. This most commonly occurs within 24 hours of the snowfall because the overload of the new snow weakens the melt-to-freeze-to-melt layers beneath. When these conditions are combined with wind, further increases in temperature, and other natural conditions like lack of vegetation and slope steepness, you see the types of dangers we have been facing this month in Colorado.

The weather forecasts this week are calling for a continuation of these perfect conditions. Heavy winds, rapid drops of large amounts of snow, coupled with temps that are forecast to fluctuate over 25 degrees in a single day — an avalanche’s delight.

According to the Colorado Geography Survey’s Colorado Avalanche Information Center (CAIC), unstable snow pack can cause a slide of up to 200 mph of blasts able to destroy structures and trees. Even the blast of air that precedes the slide can be destructive in itself. In the past few weeks, many Colorado residents have found themselves being completely consumed in their vehicles by a rush of white.

The speeds of the avalanches and sheer force of the blasts are dangerous enough, but the post-slide conditions can further complicate the issue.

Multiple authority organizations, including CAIC, are recommending Coloradans avoid avalanche zones entirely until the weather evens out. However, it is not the Colorado way to avoid ski slopes with this much powder.

Here are extremely important safety tips we should all know so well they act like muscle memory in our minds:

1. If you are in your vehicle during a slide, snow your vehicle to a stop and shut off the engine. This first step is one of the most vital to survival. Don’t let vehicle fumes take you out long before the cold ever would. Stay in your vehicle until the authorities arrive. If not completely covered, your vehicle will protect you from the elements and keep you warmer. If completely submerged, the human body is denser than snow. You will not successfully climb from your vehicle to the top of the slide where you would access warmth and air. The snow will simply continue to pack around you. You will only sink deeper into the mound. Keep yourself in the warmth and safety of your vehicle until safety crews arrive. If stuck for a lengthy stay, you may want to open your windows slightly and use an ice scraper to hollow out some space for air.

2. If you are caught in a slide while shredding, point directly downhill to attempt to gain speed. If able, veer sharply left or right to escape the path. If unable, reach for a tree. This will aid in climbing out, creating air space, and possibly absorbing the bulk of the slide versus impacting your body. Hang on to any debris, as your body is denser and will sink faster than debris. While the avalanche is still moving, swim hard. Work to create air space as much as possible. Once the slide stops, the snow pack will settle in like concrete. You want to create as much body and air space as possible. If able, punch skyward to continue to create more breathing room for yourself.

Obviously, no skier or boarder should head into the danger zones without beacons and avalanche gear. And during high avalanche periods like we are seeing now, anyone driving through the mountains should also be equipped with survival gear.

Make sure to pack blankets, water, shovels, and food in your vehicle. Make sure to keep your cell phone fully charged while driving in case of emergency, and carry an external battery. Have a first aid kit in case of minor injuries you can treat yourself and to mitigate the impact of major injuries until EMS arrives. Hand warmers will also be extremely helpful in case of being caught in your vehicle during a slide, so equipping your car with plenty of those can make a significant difference.

Here are several links for further information and safety tips:

Colorado typically sees 4–5 fatalities annually from avalanches. We have neared, if not surpassed, that average already this year. Please take heed of these preparation and eventuality tips. Do not contribute to making 2019 a record-breaking year.