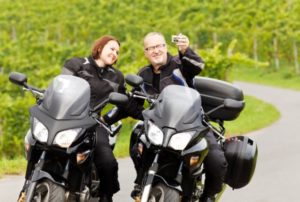 Before finding a way to resolve the rise in deaths due to motorcycle accidents, it is crucial to find the potential root causes for this staggering increase in fatalities. According to the United States Department of Transportation, a surge in motorcycle registrations since 1997 may provide information as to why more people are getting into motorcycle accidents. From 1997 to 2006, motorcycle registrations in the U.S. rose by 75 percent. With a greater number of motorcycles traveling on U.S. roadways, more collisions are likely.

New advances in technology over the past 15 years have added another cause of motorcycle accidents. Distraction.gov reports that distracted drivers were responsible for the deaths of 3,328 people in 2012. Distracted driving auto accidents injured over 421,000 people that same year. Motorists, who use their cellphones, program their navigation devices or change the DVDs in their cars’ entertainment center while driving, may fail to acknowledge smaller motorcyclists riding alongside them. Improper turns and failure to yield are just a few ways that distracted driving can result in a devastating motorcycle crash.

A 48-year-old Kansas motorist admitted to engaging in distractive activities while driving, which may have caused him to hit an elderly man who was riding his motorcycle. According to Kansas First News, the driver was operating a pickup truck and attempting to change a CD when he collided with the motorcyclist, who was killed as a result of the accident.

Failure to yield is another common cause of deadly motorcycle accidents. The Knoxville News Sentinel reported that a biker was hit by a vehicle that was attempting to make a turn. The motorcyclist was thrown onto the hood of another vehicle waiting at a stop sign and later died. The motorist was given a citation for failing to yield to the motorcycle, but did not receive any criminal charges.