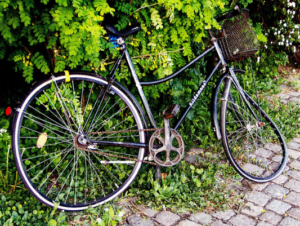 You’re at the end of a long day, just a few miles from your home, your couch, and your family, and a driver veers into the bike lane, cell phone in hand, and now your favorite Specialized bike is laying on the shoulder, wheels in a position that could make a Cirque performer cringe. But that’s not even the biggest problem. Your son has practice tomorrow, but you’re not going to be able to coach the team. You are on your way to urgent care with what you have a sneaking suspicion is a sprained ankle and what you hope is not a torn rotator cuff. The road rash is just a secondary issue you’ll deal with in the shower.

Now, on top of missing work for the next two weeks and sitting out of sports practice, you have to hunt down the incident report, field calls from insurance companies, try to find a replacement for your old-faithful ride — all while juggling doctor’s appointments and physical therapy.

And what happens to that cell-toting multi-tasker who got this joyous ball rolling? Their insurance covers the repair bill for the scratches to their paint, they pay their deductible, and they maybe, just maybe, mail a small check into the city for a traffic ticket for carelessness.

But in the state of Colorado, that may be about to change!

Senate Bill 19–175, proposed this session in the state legislature, could officially criminalize carelessness that results in serious bodily injury.

If the bill passes, it will become Colorado Revised Statute 42–4–1402.5, which will make it a class 1 traffic misdemeanor to cause “serious bodily injury” to a “vulnerable road user” while engaged in “careless driving.”

Sounds like a lot of quid pro quo, so let’s break it down:

Careless Driving: CRS § 42–4–1402 defines careless driving as operating a motor vehicle “in a careless and imprudent manner, without due regard for the width, grade, curves, corners, traffic, and use of the streets and highways, and all other attendant circumstances.” A solid “kitchen sink” technique of defining a legal standard. But authorities have used “careless driving” to encompass things like speed, failure to obey the Move Over laws, cell phone usage, and other general methods of distracted driving.

Vulnerable Road Use: Now this part is clearly articulated in a lengthy — sometimes oddity encompassing — recitation contained within the bill itself. It includes:

Serious Bodily Injury: Section 18–1–901 of the Colorado Revised Statues defines “serious bodily injury” as an injury in which “either at the time of the actual injury or at a later time, involved a substantial risk of death, a substantial risk of serious permanent disfigurement, a substantial risk of protracted loss or impairment of the function of any part or organ of the body, or breaks, fractures, or burns of the second or third degree.” Yet another conglomeration that legislatures are so good at constructing.

For as long as Colorado has been a state, arguments have occurred over what degree of injury is required to be deemed “serious.” Breaks and fractures are clearly defined, but what about a major sprain, a torn ligament, a concussion or a back injury? All of these fit within the parameters of an injury that could cause a protracted loss or impairment of function, and it is out position that if you are a vulnerable road user who is stuck with any of these types of wounds, you will have zero doubt as to your qualification for “serious bodily injury.”

So now what? What happens to the culprit?

Under the new bill, CRS § 42–4–1402.5 would allow police to investigate and charge careless drivers with a Class 1 Traffic Misdemeanor open to the following penalties:

· Community Service of up to 320 hours

· Restitution to the Injured Party

These are much stiffer penalties than the previous fines associated with careless driving citations.

Because this is a truly criminal offense, and because we all have the right to be protected against unreasonable and unlawful punishments, everyone charged under this section will have the right to defend themselves. True accidental collisions will not apply to this new proposed statue.

Co-sponsor of the bill, Representative Dylan Roberts, told the Meghan Lopez of The Denver Channel that “[y]ou have to be found guilty of careless driving, so if it’s truly an accident, you’re not going to be liable under this bill.”

The legislature appears to have made it a priority to protect malicious or overuse of this statute, while balancing the importance of protecting the outlined vulnerable road populations. Just last week, an officer and a utility worker were killed in road accidents. Several motorcyclists were either injured or lost their lives. And no need for exaggeration here: cyclists and pedestrians are struck at a seriously alarming rate. In a state like ours where people are especially conscious of more environmentally friendly and healthy modes of transportation, not to mention mobility methods that allow us to enjoy the world-class weather, keeping an eye to safety protections is especially vital.

As this bill makes its way through the legislature, feel free to contact us with questions or in a search for more information about how this statute could affect your commute and safety.