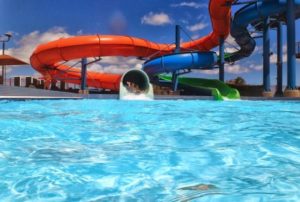 When Tennesseans swim in pools and waterparks, they could become sick due to waste byproducts called chloramines and disease-causing pathogens that are present in the water if disinfection efforts are performed incorrectly. Many pools are disinfected with chlorine, but chlorine can form chemical byproducts with urine, sweat, and other organic waste that people leave in the water. These byproducts can leave a layer in the water and in the air, irritating people’s respiratory tracts. There may also be a number of disease-causing pathogens that remain behind in the water, causing swimmers to contract a variety of illnesses.

Chloramines in the Water and Air

Swimming pools may be disinfected using several different approaches, including UV light and others, but the most popular disinfection method is using chlorine because it is cheap. While chlorine can do a good job of killing most pathogens, it reacts with organic waste, such as urine, sweat, feces, and sunscreen, that is introduced by people when they swim. When chlorine reacts with these different types of waste, they can form irritants called chloramines and nitrosamines. These irritants give off gases that are heavier than the air, and they can settle around the swimming pool in the air while also settling in a thin layer on the water’s surface. These irritants have been shown to cause irritation to the eyes, nasal passageways, and respiratory illnesses, and they have been linked to certain types of cancer. Swimming pools can use ventilation systems to remove chloramines from the pool area and prevent personal injuries. If the pool owner does not have a ventilation system installed or has it installed improperly, people may become ill.

While chlorine kills many pathogens, some only die after being exposed to the chemical for 20 or more minutes. This means that people who are present in the pool when a baby in a swim diaper defecates may contract illnesses despite the presence of chlorine. Guests at swimming pools and water parks should always take showers before they enter the pool, and parents should be aware that swim diapers are ineffective for preventing contamination. Public pools should have ventilation systems installed that are working properly and they should post signs telling people to shower.