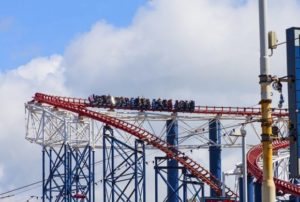 While many Tennesseans enjoy visiting amusement parks every year with their families or friends, thousands of people are seriously injured during their visits. The regulations governing amusement park safety are inconsistent across the U.S., and some parks may be more dangerous for visitors than others. It is important for consumers to be aware of the risk of accidents at amusement parks and the regulation inconsistencies involved when they are choosing a destination. When victims are injured at amusement parks, a personal injury attorney may work to help them to recover damages for their losses.

According to the U.S. Consumer Product Safety Commission, an estimated 30,900 people went to the emergency room for treatment of injuries that were sustained in amusement parks in 2016. Since 2010, 22 victims have been killed while visiting the parks with some tragic stories making national news. Because there is no formal reporting system in place, safety experts say that it is difficult to get a clear picture of the actual injury rate at the parks.

Regulations and Enforcement Are Inconsistent

A personal injury attorney may help victims who are injured, but it’s best to try to avoid injury in the first place. Amusement park visitors should follow safety guidelines while they are at the parks. They should adhere to all of the height, health and weight restrictions for the rides. Safety equipment, including seat bars and belts, should always be used, and guests should be careful when loading and unloading in and out of rides. Avoiding mall rides that do not have any padding underneath them is a good idea. Additionally, all riders should keep their hands and feet inside of the rides.