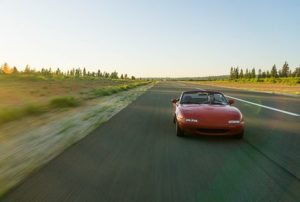 In reaction to distracted and inattentive driving, Mazda has patented a new driver assistance technology that would engage drivers to make the driving experience more fun. The idea behind the technology is that drivers may become bored while they drive, leading them to glance away from the road on their mobile devices or other electronics. The system would use cameras and sensors to determine when a driver was becoming inattentive and then actively engage the driver in order to draw his or her attention back to the road. Instead of artificial intelligence taking over the car, it would use things like speakers to amplify the engine noise or suggest alternate routes with curvier roads that would require people to keep their eyes on the road.

The driver assistance technology that was recently patented by Mazda would encourage drivers to keep their focus on the roads by making the experience more fun. The technology would use cameras and sensory inputs to analyze when drivers were becoming inattentive or distracted by measuring reaction times and other factors. When the system senses that a driver is becoming inattentive, it will give tips to the driver about how to improve his or her driving skills. It might suggest ways to accelerate or to turn so that the driver has a better experience. The systems may also suggest more scenic routes that have curvy roads. This is because driving on these types of roads naturally forces drivers to pay more attention to what they are doing in order to remain safe. The technology also might be used to make the engine sound louder so they might be encouraged to slow down their vehicles.

The technology that has been patented by Mazda is only at the patent stage, and it is unclear whether the company has any plans to develop it. The system is an innovative way to tamp down driver distraction. Messages telling people not to text and drive have had little effect, so new technology that would focus on other aspects of the driving experience might be helpful to reduce driver distraction while increasing driver engagement.