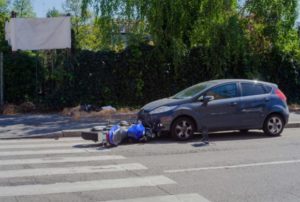 Motorcycles are notorious in Tennessee and across the nation for being inherently dangerous vehicles. A Tennessee motorcycle accident attorney understands that in many cases the vehicle’s reputation may not be an accurate assessment of its safety around other vehicles. According to a recent study performed by the National Highway Traffic Safety Administration, most crashes between motor vehicles and motorcycles occur because the drivers of the cars fail to properly yield the right of way to oncoming bikers.

To reach their conclusion, the NHTSA performed a study with the main purpose of determining why so many motorcycle fatalities result from two-vehicle crashes. They also aimed to determine factors involved in these accidents. Researchers relied on data from the Fatality Analysis Reporting System, a nationwide census that tracks yearly public data for fatal motor vehicle accidents, for the study. They analyzed data trends for crash characteristics, vehicle type, and the role of the driver and operator in each accident.

A Tennessee motorcycle accident attorney knows that accidents similar to those the researchers used for the study happen daily in Tennessee. ABC News 2 in Nashville reports that a biker was critically injured in an accident when he recently crashed into a minivan in Belle Meade. The accident occurred at the intersection of Harding Place and Harding Pike when the driver of the minivan turned left and into the biker’s path. The motorcyclist was taken to the hospital with serious leg injuries, and doctors indicated that he may possibly lose his leg.

These car and motorcycle accidents occur often, but both motorists and bikers can take steps to help minimize the chances that they will be involved in a similar crash. Researchers with the NHTSA indicate that the largest tool motorists can use is motorcycle awareness. Motorists should also make it a habit to look twice for motorcycles before pulling out into traffic.

Bikers can do their part by wearing bright colors or reflective clothing to increase their visibility and the likelihood that they will be noticed. When these tactics fail and accidents do occur, injured motorcyclists should contact a Tennessee motorcycle accident attorney immediately for legal assistance.