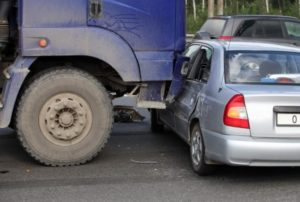 According to the National Highway Traffic Safety Administration (NHTSA), there are approximately 10 fatal truck accidents and truck crashes that result in a shocking 284 injuries each day throughout the United States. With fatal trucking accidents up approximately 18 percent since 2009, and those that cause injuries up an estimated 23 percent, it is obvious that something needs to be done.

A good place to start would be for truckers, drivers of other vehicles sharing the road with truckers, and even bicyclists and pedestrians to develop a better understanding of what causes so many catastrophic accidents. In 2007, the Federal Motor Carrier Safety Administration decided to become proactive in the investigation of large truck accidents. They released a report, called The Large Truck Causation Study, which is the first of its kind to examine the true causes of large truck related accidents.

The study evaluated a sample of 967 large truck accidents nationwide. 1,127 large truck and 959 vehicles of other types were involved in the study. The accidents investigated resulted in an alarming 251 fatalities and 1,408 injuries. The top 10 causes of big rig accidents according to the study are shocking.

Another major cause of accidents that involve large trucks is equipment failure. Improper maintenance, low quality equipment, unattended repairs, and defective equipment have all been factors in trucking accidents throughout the nation. When equipment on a large truck fails, the result can be catastrophic regardless of how safe the driver, or other drivers around him are.