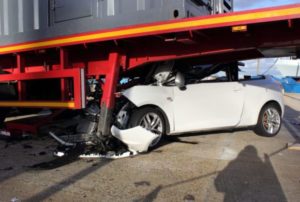 Both truck driver negligence and equipment malfunction contributed to an enormous traffic accident involving three tractor trailers and two cars near Monteagle. According to the Chattanooga Times Free Press, motorists were injured when the axle of a commercial truck carrying eggs snapped in two, causing the truck to overturn and spill its contents across the highway. As traffic was stopped at the accident site, another tractor trailer collided with a third commercial truck, spilling cheese and meat onto the highway as well. Fortunately, no one was fatally injured in the accident.

This case is not an isolated incident. In fact, 3,802 U.S. motorists were fatally injured in large truck accidents in 2012. This is a significant increase from the 3,211 people who were killed in 2009, according to the National Highway Traffic Safety Administration. Tennessee’s large truck fatality rate has increased as well, from 86 deaths in 2009 to 107 deaths in 2012.

A closer look at equipment malfunction

Equipment malfunction, which caused the initial truck accident near Monteagle, can result in a devastating accident. According to the Federal Motor Carrier Safety Administration, trucking companies and truckers are responsible for ensuring that their tractor trailersare safe for the road. The trucker must inspect key components of the semi-truck, including the engine, lights, brakes, front suspension, drive axle suspension, drive shaft, axles and tires to make sure that everything is functioning properly. Routine maintenance should also be conducted on a regular basis.

FMCSA reported that in 2012, 20 percent of all large trucks were removed from service because they had too many equipment violations. That equates to more than 2.15 million trucks that did not meet safety or equipment requirements and could have potentially caused an accident.

The second part of the accident in Monteagle occurred when a truck driver was allegedly speeding and failed to stop with traffic at the site of the previous accident. The Insurance Institute for Highway Safety states that it can take a loaded commercial truck nearly 40 percent longer than a passenger vehicle to come to a complete stop. In order to avoid rear-ending the car in front of them, truckers must leave ample space between their truck and the car ahead, and be sure to drive within the posted speed limit. In some areas, the commercial truck speed limit is lower than the speed limit posted for passenger vehicles.

Truck drivers can minimize the risk of an accident, injury and death by refraining from driving while distracted, drowsy or impaired. They should also always perform an equipment inspection before hitting the open road.