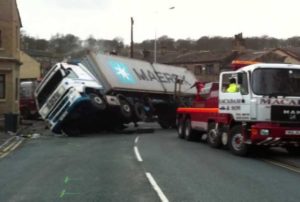 For many years now, tow truck drivers across the nation have been reluctant to upgrade their equipment to enable them to provide towing services for big rigs, cement trucks and other large, heavier vehicles. They would often cringe at the mere thought of being dispatched out to accidents and emergencies involving semi-truck and similar vehicles even if they did have the equipment that was necessary to provide service. This is largely due to the knowledge that they would likely end up facing massive fines resulting in thousands of dollars of added expenses for their company if they were caught operating their truck overweight.

Fortunately, things are about to change. A bill, commonly referred to as the Fair Tow Act, which was proposed in July of 2014 by U.S. Rep. Chuck Fleischmann, R-Tenn, will soon make it legal for tow truck operators to operate their trucks over the federal maximum weight limits on federal roadways as long as they are moving a large truck or other heavy piece of equipment away from the scene of an accident or emergency situation.

According to Fleischmann, the two main goals of the Act is to first, provide tow truck operators with the incentive to assist with removing these massive vehicles from roadways where they could cause additional dangerous accidents and possible injuries, and secondly, to get these broken down heavy vehicles out of harm’s way. The potential for heavy fines has been a deterrent to tow truck companies in the past, especially for smaller trucking companies who could be devastated by such costs.

The Fair Tow Act was initially introduced to the house as a stand alone bill, but was eventually incorporated into the high profile FAST Act long term highway and transportation funding act that has been making headlines for weeks. The inclusion of the Fair Tow Act into the well known highway act will have no bearing on the language of the measure, it will simply expedite the Act’s approval.

An approach by officials at Miller Industries, an internationally known manufacturer and supplier of tow trucks and equipment headquartered in Chattanooga, is what prompted Fleischmann to bring the proposal before his Congressional colleagues. According to William G. Miller II, president at Miller Industries, the company is frequently a voice for the towing industry, which is predominantly made up of small companies and entrepreneurs. According to Miller, trucks and other types of equipment have progressively gotten larger and heavier, and in response tow truck companies and owners have been pushed to buy or build larger trucks and mechanisms that can haul them. While some companies have attempted to use smaller trucks and lighter equipment to ensure that they are in compliance with weight limits, doing so can pose even more dangerous risks because of the lack of breaking capacity.

The Fair Tow Act is not a free ticket for tow truck drivers to haul large trucks and other heavy equipment in excess of weight limits on federal roads at will. It simply protects tow truck owners from receiving massive fines for removing heavy vehicles and equipment from accidents and emergency situations. As an added note, tow truck drivers will be required to drop heavy loads at the repair station nearest their location. Long hauls and those that are planned will still require that the company obtain special permits to be in compliance with the law.

Tow Trucks Will Not Be Exempt from Other Trucking Laws

Tow trucks will not be exempt from most other laws that pertain to the safety of large trucks. Anyone that uses a “commercial vehicle” to conduct business on the roadways is considered to be a motor carrier, and in most cases, tow truck drivers are included. While the FMCSA governs interstate truckers, drivers should be aware of state specific regulations in order to maintain safety as well. The key areas that these regulations focus on are:

If the tow truck driver is operating in support of an emergency or accident, however, some or all of the regulations do not apply. In the case of towing, a qualifying emergency includes:

To simplify things, when a tow truck driver is operating under normal tow truck driving conditions and not under one of the circumstances listed above, he or she is subject to the same rules and regulations that would apply to a commercial vehicle and driver.