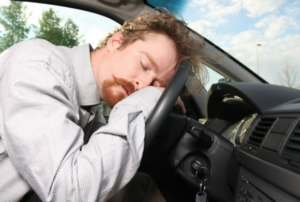 New technology is under development to reduce accidents caused by drowsy driving in Tennessee and elsewhere, which claim the lives of 6,000 people in the U.S. each year. The device is worn on the wrists of drivers, and it uses biometric data to sense when they are beginning to get drowsy. If they show these signs, the device will vibrate. If the drivers then start to fall asleep, the device sends electrical pulses that shock the drivers awake so that they can get off of the road. Some of the cases that a Nashville car accident lawyer handles involve drowsy driving crashes that have caused serious injuries or deaths when the drivers fall asleep behind the wheel.

How the Drowsy Driving Technology Works

The entrepreneur behind the company Creative Mode became concerned about the problems of drowsy driving after his friend fell asleep at the wheel and crashed into a tree, causing serious injuries. The entrepreneur then began working to create a new device that could help drivers to remain awake. He came up with a wearable device that he named Steer. Drivers wear the device on their wrists while they drive. After first taking a baseline reading, Steer takes biometric readings of the drivers, including heart rate and sweat production.

If a driver’s heart rate drops below the baseline reading by 10 beats per minute and the sweat secretion drops by one unit, the wearable device will vibrate to alert the driver that he or she is drowsy. If the driver’s heart rate subsequently falls by an additional three beats per minute and the sweat secretion decreases by another unit, the device sends gentle shocks that are strong enough to wake the driver up.

The idea behind using the shocks is that they increase the levels of serotonin in the brain, which causes drivers to awaken. The entrepreneur says that even if the devices wake the drivers up, they should pull off of the road and get some sleep to prevent automobile accidents rather than attempting to continue driving. The device has generated significant interest and more than 100 investors on Kickstarter are currently backing it. It is expected to retail at $230. Drivers can currently purchase Steer on Kickstarter for $130. A Nashville car accident lawyer may help victims who have been injured by drowsy drivers.