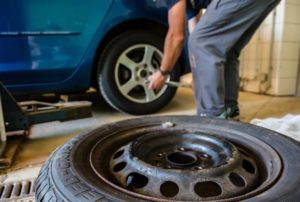 In Tennessee, some accidents are caused by tires separating from vehicles on the highways that then crash into other cars. While these types of accidents are rare, some motorists are seriously injured or killed when their vehicles are struck by flying tires. Tires may separate from vehicles because their lug nuts have not been tightened enough by tire mechanics when they change the tires on the vehicle. They may also separate when the mechanics apply too much torque when they are replacing the tires, weakening the lug nuts and causing them to fail.

When tires fall off of vehicles while they are traveling on the highways, they may fly through the air and collide into other vehicles. These car accidents are sometimes deadly. In a recent case in Nevada, two cousins were killed when a tire separated from an SUV that was traveling in the opposite direction on Interstate 95. The tire crashed through the windshield of the vehicle in which they were passengers, killing them both. An engineer with MFA Forensics states that there are around 50,000 tire separations each year, and the incidents are underreported. This makes it difficult to determine the pervasiveness of the problem.

What Causes Tires to Separate?

Tires may separate from vehicles because of several maintenance issues. In 643 cases that happened between 2000 and 2003, 65 percent were caused by loose lug nuts, and 26 percent were caused by wheel bearing failures. Nearly all of the cases could have been prevented by proper maintenance. In a Canadian study, 83 percent of the reported wheel separations happened soon after the vehicles’ tires had been serviced.

Tires may separate when their lug nuts are tightened too much or not tightened enough. Mechanics that do not use the proper torque or calibrated tools when they change the tires may cause too much pressure to be applied to the lug nuts, causing them to sheer off while the vehicles are being driven. This may then lead to the tires flying off of the vehicles and striking other motorists who are traveling nearby. The mechanic shops that performed the improper maintenance may be liable to pay damages if people are killed or injured when the tires separate and fly off the vehicles.