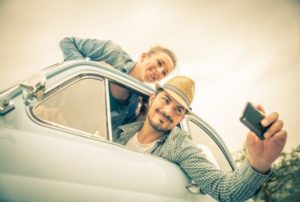 Over 56 percent of American adults own smartphones with photo-taking abilities, according to a poll taken by Pew Research Internet Project. This gives millions of people the opportunity to take the perfect selfie and post it to their favorite social media website. However, a growing number of Tennessee motorists are taking selfies while they are driving. Not only does this increase the risk of a car accident, but it endangers the driver’s life as well as the lives of others on the road.

A picture for the road

CNN News reported how social media websites, including Facebook, Instagram and Twitter, all show thousands of posts of people taking pictures while behind the wheel, and many driver selfies include accompanying texts. In fact, more than 9,700 selfies were posted to Instagram recently under the hashtag #drivingtowork, and another 3,727 were found under #drivingselfie. Furthermore, the practice of taking a photo of yourself while driving is not limited to people operating automobiles. Motorcyclists, commercial truck drivers and even pilots have been seen snapping a pic while driving.

In order to take a selfie, a driver has to remove their eyes from the road, their hands off of the steering wheel and their minds off of driving. All three of these activities are forms of distracted driving, which was responsible for the deaths of 3,328 people nationwide in 2012, according to distraction.gov. In order to take the perfect selfie, drivers have to get to the camera function on their cellphone, position the camera properly and take the picture. Many people go on to type a message or hashtag with the picture and post it to their profile page. Drivers who take the time to accomplish this daring feat are three times more likely to get in a car accident.

That is what happened to a 32-year-old North Carolina woman, who was posting selfies and updating her status on Facebook just one minute before being involved in a fatal car accident. The Huffington Post reported that the woman’s last text was posted at 8:33 a.m. and law enforcement officials were alerted to the accident at 8:34 a.m.

Distraction.gov reports that texting on a hand-held device while operating a vehicle in Tennessee is against the law, and those who are caught engaging in this activity will receive a citation. Whether motorists are stopped at a traffic light, driving, or having a passenger take the picture, it may be best to postpone the selfie until the vehicle is safely at rest.